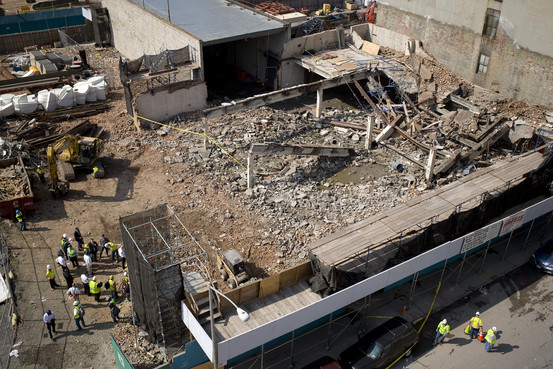 Lawsuits in the modern age are a dime-a-dozen. However, lawsuits involving a former mobster, a fatal structural collapse, and a prestigious United States university are a bit more rare. Columbia University’s controversial building projects in Harlem, one of New York’s more infamously poor neighborhoods, resulted in a fatal accident back in March after a slated-for-demolition warehouse suddenly collapsed, killing one worker and seriously injuring two others. The incident prompted New York City officials to issue a stop work order for the entire project, halting Columbia’s plans to turn the area into an academic and business hub.

Now, Toby Romano Sr., the contractor whose company, Breeze National, was hired by Columbia to undergo the initial 8 building demolition, is suing the university on the grounds that their contract for $2.54 million was “unlawfully terminated” in order for the academic institution to save face. Romano further alleges that university officials made “disparaging implications” and damaging statements that attempted to place blame on Breeze for the collapse. Romano was charged with bribery in 1988 as part of an FBI crackdown on organized crime. He served a 1 year prison sentence.

This saved Columbia from more potential negative publicity, but Columbia maintains that because the collapse only occurred after demolition workers had cut a structural steel beam, that there was gross negligence on the part of the contractor. Breeze fired back at this accusation with two reports conducted to determine the cause of the accident that pointed to poor construction design in what was an over 100 year old structure.  Breeze’s firing from the project came after Columbia had signed off on the demolition process the firm planned to use.

Lawsuits of this kind tend to result in a settlement in which a portion of the agreed contracted amount is paid, however this unfortunate incident puts the demolition industry as a whole in a negative light, as a tragic accident results in the blame-game, and no one is willing to step up and accept responsibility.