The demolition of a 300 meter stretch of the “Elevado da Perimetral” or the Elevated Perimetral Bridge was done early morning of Sunday, April 20th, 2014 in Rio de Janeiro, Brazil. The bridge was demolished in a previously calculated 3 seconds. The demolition happened in the 300 meters track between Navy and Federal Police buildings

There were two options in demolishing this bridge; either by mechanical work, such as breaking the concrete with a hammer, or by implosion. After doing further technical assessment, it was proven that the implosion is much faster and safer because there were pre-stressed steel cables in the concrete slab of the bridge which could have jeopardized the safety of the work.

There were two main issues concerning the implosion of the bridge. The first one was the shattering of different parts of the bridge by the implosion and impacting nearby structures such as Navy and Federal Police buildings. For that reason, the bridge’s pillars were covered by a screen so that no chunks of debris were thrown against neighboring buildings. Furthermore, the area was isolated from the population and traffic at the time of implosion. The second issue was the seismic effect due to the falling of the bridge and its impact with the ground. There was concern that sensitive historic buildings near the bridge could have been damaged.  Seismic analysis was performed by Applied Science International (ASI) engineers to ensure that the seismic effect of the bridge implosion on these buildings is within the acceptable range. Also, seismographs were spread across different locations, such as the headquarters of the Federal Police, the Art Museum of Rio (Sea) and the Monastery of St. Benedict. According to engineer Giordano Bruno, one of those responsible for the operation, all seismographs recorded values that matched the pre-calculations and were ​​below the maximum allowed, which is 15 mm per second. He said “the impact on nearby buildings was 3 mm per second and the São Bento Monastery was zero”. 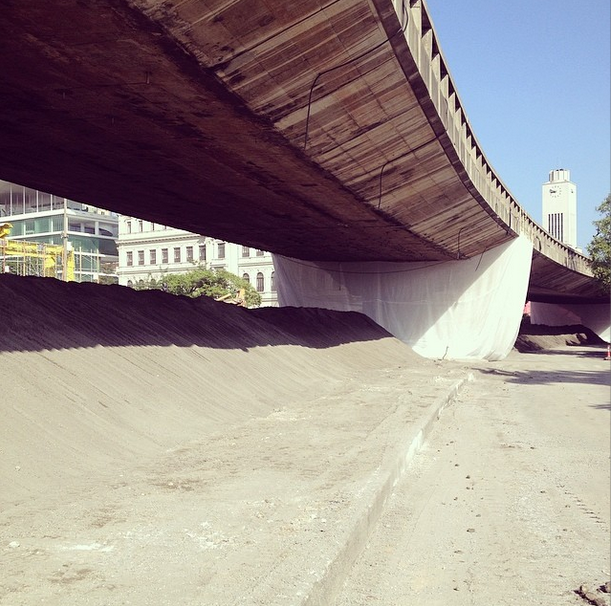 The demolition of the bridge is considered successful in every aspect. The demolition contractor Fábio Bruno Construções and Applied Science International (ASI) succeeded in working together in a perfect zero accident demolition, zero damage demolition while optimizing demolition conditions.